How could it not be with the past four years build-up to WWI centenary commemorations reaching their culmination on this, the 100th anniversary of Armistice Day.   My own direct connection to WWI (The ‘War to End All Wars’ – yeah, right.) is via my grandfather, William Frederick Wiseman, who I never met (he died three years before I was born) but know enough about to understand the horrors endured as a young soldier, injured and taken POW.  It disappoints me that, in amongst the hype of ‘lest we forget’ and ‘never again’ , very little attention is being given to those who, while they may have survived bodily intact, were utterly blown apart emotionally and mentally; this devastation showing not so much physically but more in behaviour and personality;  shellshock (now more accurately understood as PTSD) being a definite consequence for my grandfather, echoing down through future generations.

Feeling totally overwhelmed and utterly exhausted with it all today, I’ve turned my attentions elsewhere, and was delighted when this little snippet of social history popped up on Facebook.

OK, so on closer inspection it turns out to be the wrong era; WWII as opposed to WWI; and of American origin, rather than UK.  But I’m fairly certain similar principles apply both sides of ‘the pond, with agricultural practices remaining largely unchanged across the decades.  Turns out honeybees played a vital role in national defence; not only in the production of food and seed but also in the manufacture and maintenance of military equipment – with 350 or more uses for beeswax in the navy and army (including waterproofing canvas tents, belts, cables and pulleys, also the metal casings of bullets) and 150+ applications in the pharmaceutical field.   I love the direct window into the past these old documents offer;  DO NOT OPEN validated by the claim of a hive void of ‘honey for human use’ – stocked only with ‘bee feed’.  With a wartime shortage of sugar and fruit on ration, the prospect of a sneaky sweet treat must’ve been a very real temptation; no doubt leading to surreptitious raids, under cover of darkness.  Also the instruction: ‘Hunters – Please Do Not Shoot’.  Can you imagine; some local poacher or gung-ho toff – even a group of naive local lads – firing bullets into a beehive … ?! The underlying sentiment, however; help win the war – protect bees; is as valid now as it was then; only now on environmental grounds more than military – yet still with that same foundation of fact; that no bees means no pollination … With disastrous consequences for everyone.

Ok, so I tried to come up with a clever and witty title for this one – and failed.  Chutney.  Not a word that lends itself easily to rhyme or humour, but a classic addition to the traditional Ploughman’s Lunch; a go-to accompaniment to cold meats and cheese, and an ideal way to preserve allotment fruit and veg.  And OH so typically English, right?  Well, yeah-but-no-but.  As a savoury preserve made from fruit and veg simmered with sugar, vinegar and spices, chutney has it’s origins in British Colonialism.   Yup; as with so many aspects of this small island’s insular culture (think tea, marmalade, and Chicken Tikka Masala) chutney is an idea adapted from elsewhere; the sugar and spices a legacy of British Empire expansion, and the word itself rooted in the Hindi  चटनी chaṭnī, meaning ‘to lick’. 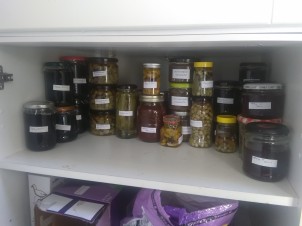 I am not sure I’d want to be ‘licking’ chutney up all on it’s own, but it’s definitely a good thing to have stashed in the cupboard; a great way to use up allotment gluts, and something I’ve been experimenting with in recent years.   Turns out chutney is easy to make, once you know the basics.  Endless ingredient combinations are possible, meaning that no two batches need ever turn out the same (although they can if you want them to: just write it down so you can roll out your own signature recipe, time after time).  Stored in super-clean, tightly-sealed jars, chutney will keep for aaaaages (years and years) and – bonus – gets better with age.

I’ve no idea where I first found my recipe – or, more accurately, the recipes – on which my own is based.  Certainly it would have involved some internet clicking, flicking through various books, a few pages pulled from magazines.  And then some experimenting with ingredients, proportions and cooking times.  Wherever it began I now have my own tried and tested preference, which I adapt to whatever ingredients I have available to use.   My two most recent variants have involved a small mountain of apples given to me by a friend, together with my own surplus of tomatoes and chillies; the second batch including Hallowe’en pumpkin innards.   Two afternoons steaming up the kitchen in a sugar-vinegar-spice ‘aromatherapy’ session = a shelf now laden with jars packed with produce that I’d otherwise struggle to find a use for.  Chutney is not, however, the place for old or passed-its-best produce.  Ingredients need to be fresh, with any bruises, blemishes and rotten bits removed. Good ingredients = good chutney.

Ingredients & equipment:  the whole point with making chutney is that you can vary it, according to whatever you have and how you want the end result to come out tasting.  The basic (but endlessly flexible) rule is: vegetables & fruit, sugar, vinegar and spices.  See below for proportions (weights and measurements).

Fruit & Vegetables:  layer the flavours and textures; aim to balance savoury/sweet.  Onions are essential, for flavour and texture (unless of course you really dislike onions).  Garlic; not essential, but chuck it in if you want.  Apples, and other sweet fruit and ‘veg’ such as tomatoes, pumpkins and squash.  Maybe also a smaller amount of dried fruit – dates, sultanas, apricots, even figs or prunes, to add flavour and colour.  Then a more savoury layer; courgette, maybe some roots (carrots, sweet potato, parsnips, turnips, swede, even beetroot).   Some people use up green beans in chutney.  I’ve never tried.  But that’s just me.  Avoid starchy veg, such as potatoes, as these generally don’t work in chutney – plus they do not need preserving in this way, because they keep well enough on their own.  Nor would I use green leaves, such as kale or cabbage; that would just be weird.  Chop everything the same size; small chunks or slices, so it all cooks down at the same rate.  The classic shop-bought Big Brand ‘pickle’ (you know the one) contains rutabaga (otherwise known as swede), carrots, onions, cauliflower and courgette, together with apples, dates, tomato paste and gherkins – coloured with caramel and thickened with cornstarch (neither of which you need in your own homemade).

Sugar: always some sort of brown, for flavour and colour.  Chutney made with white sugar would come out pale and uninteresting, and more than a tad strange.

Vinegar: very much a personal preference.  I avoid malt – it may be cheap, but it is harsh, and overpowering – and stick instead to wine or cider vinegar, with sometimes a small amount of balsamic substituted in the total.  But this is your chutney; your choice.

Spices: again personal preference.  Whatever works with the fruit and veg combo.  Final taste can be tweaked with dry spices added towards the end.  And remember, the taste will mature over time, as the chutney is stored; melding and deepening the flavours.

PROPORTIONS (weights and measurements): recipe can be scaled up, according to how much fruit and veg you have to use up – and the size of your pan.  Smaller batches are best, for both taste and ease.   So long as you keep the proportions in balance, it shouldn’t go wrong:

Fruit and veg; 1kg total in combination.  For example, 300g each of onion, apples, tomatoes, with 100g  dried fruit of your choice (data, sultanas, even figs or prunes).  Play around with what you have available, and what you like to eat.  If using fresh chillies (as opposed to dried), include these in the fruit & veg total weight.  Then, for every 1kg of fruit/veg mix you will need 167g sugar and 330ml vinegar, with spices according to taste; no exact weights, just play around and find your own way.

And if those odd numbers are confusing, try 600g fruit/veg, 100g sugar, and 200ml vinegar – again multiplying up, for larger batches.

You will need a large heavy-based pan, suitable for simmering over a slow heat for a long time, large enough to hold a LOT of ingredients, with room to stir – and to do this, a long-handled large wooden spoon (metal spoons scraping pans = not such a great idea).

And of course, glass jars.  With twist-top metal vinegar-proof lids.  You can re-use jars.  And you can sometimes re-use lids; the key point is they must be vinegar-proof, not smell of whatever they’ve been used for previously, and with the plastic inner seal sufficiently intact to close properly again; the idea is to keep air out (from the finished product) preventing the growth of bacterial mould, thus enabling long-term storage.  New lids cost mere pennies, and are worth investing in; rather than make do with less-than-perfect old ones.  The jars will need sterilising.  The easiest way is to wash them, then heat in the oven (more of this later).  Or put them in the dishwasher on hottest setting.  They must be absolutely clean and completely dry before the chutney goes in.