People have been enjoying honey for many thousands of years,

as evidenced in the ‘Man of Bicorp’ cave painting on the walls of  The Cueves de la Arana (‘Spider Caves’) in Valencia, Spain, depicting honey being harvested around 8,000 years ago: not from a ‘hive’ as we know it now, because people didn’t ‘keep’ bees back then and instead risked their lives for a rare taste of the sweet stuff – shimmying up trees or balancing against the cliff face on rickety wooden ladders, to access the honey stored by wild colonies living high in hollow tree trunks and hard to reach caves.

Wild honey harvesting continues to this day in some parts of the world, and remained the only option prior to the medieval adoption of the straw ‘Skep’ as the preferred method right through to the late 18th century, when the modern box hive began to take form.

A lot has changed in 8,000 years.  Meaning that, yes, when our prehistoric ancestors plunged their bare hands deep inside the wild bee colony to break off chunks of dripping honeycomb, certainly a number of bees died in the process; mainly the larvae and grubs encased in the hexagonal cells of the comb, all of which got eaten along with the honey – valuable extra protein with the sweet hit!

Likewise, the medieval monks housing wild-caught swarms in their new-fangled straw skeps had just the one option when it came to harvesting; splitting open the skep to break up the comb to retrieve the honey (filtering out the bits of bees, larva and wax through a fine fabric sieve) before starting all over again with a new swarm in a new skep.  The development of the modern box hive changed all this,  with the deliberate design of a two tier system, in which the queen and colony live safely in the lower chamber, called the ‘brood box’, whilst the honey is harvested only from the levels above this, called the ‘super’. 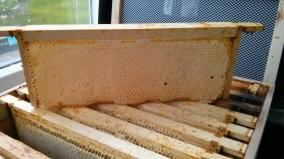 It is a relatively easy process to lift off the supers to remove the honey without damaging or killing any bees along the way.   And as a small-scale hobby beekeeper, the last thing I want to do is harm my bees.  A new colony of bees from a reputable breeder costs on average between £150-£200.  Or you can raise your own, with time and skill.  As beekeepers we spend all year nurturing and tending our bees – expending vast amounts of time, money, and effort in keeping them alive.  It would be utter madness to kill them during the all-to-brief summer honey harvest – only to then have to start all over again; buying more bees!

It is however a miserable fact of large-scale honey production that industrial beekeepers do not share the same regard for their bees, and may indeed find it more cost-effective to destroy the bees during or after summer honey harvest and buy more the following spring – rather than worry about (and spend time and money on) keeping them alive over the winter months.  For a small-scale beekeeper, however, the exact opposite is true; we strive to support our bees to survive, and take care not to harm them.