Yes, some beekeepers (particularly those working on a larger scale) will prevent the queen bee from being able to fly by clipping her wings.  NOT by ‘ripping’ them out but, more accurately, by trimming the wings with small sharp scissors (removing no more than a third) so they remain intact but become non-functional.  which I know this sounds harsh, and to understand the rational you need to first understand some basic bee behaviour. 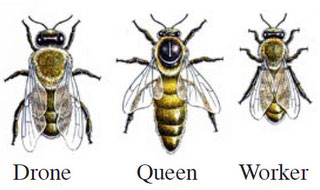 A honeybee colony comprises three types of bee; female Queen, female workers, and male drones.  The queen bee is the central figure in the colony.  While there are many tens of thousands of workers and a much smaller number of male drones, there is only one Queen, and her sole purpose in life is to lay eggs – up to 2,000 per day!  No queen = no bees (which of course means no honey).  The queen bee’s highly specialised anatomy means she is unable to forage for food or perform any of the many essential tasks of survival.  She is totally dependent on her worker offspring.  If, however, she ‘fails’ in her egg-laying duties (through ill health, poor genetics or simply old age) then the colony will waste no time in raising a replacement, and they will then kill the old queen (their own ‘mother’) – making way for the new one to take over. 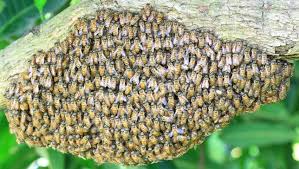 Either that or they will swarm.  This means that the colony will split; first they will go through that same process, raising a new queen; half will leave with the old queen to set up home elsewhere, while the other half remain with the new queen, and carry on as they were.  This leaves both halves of the split temporarily weakened and vulnerable – which can be bad news for a beekeeper, as the remaining colony may then collapse, or take time to recover from the swarming process – time that could have been better spent thriving and producing honey.  But here’s the thing; if the queen cannot fly, then the colony will not swarm.  That is why beekeepers clip (not rip!) the queens wings.  Not to ‘keep her prisoner’ but to ensure the colony stays strong.   On a personal note, I do not clip my Queen bee’s wings.  In fact I don’t know any beekeepers who do.  It is mainly the larger scale industrialised honey producers who do this.