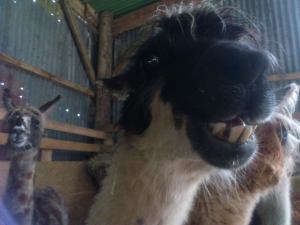 Those who are familiar with my activities will know that I have been working as a volunteer Llama Trainer at the fabulous Llamaland near Truro (Cornwall), helping to prepare them for the popular Llama walks: socialising these intelligent animals to the weird ways of human behaviour and getting them used to walking on the lead.  As anyone who has ever worked as a volunteer – no matter where and in whatever capacity – will tell you, one of the perks is the availability of things that you wouldn’t otherwise have access to – in this case; llama poo!

But why, I hear you thinking, would I be so excited about Llama Poo?!?!

As an enthusiastic and experimental grow-your-owner, I’ve heard that Llama poo is very good for the veg patch and garden, and in fact has many benefits over other manures – the main one being that it doesn’t need to be rooted down before use but can instead be put to work immediately; spread around or dug in to improve soil fertility.  Now in the fortunate position of having access to an abundant supply – ‘bring your own bags: take as much as you want!’ – there was of course no way that I could resist!

And thus was born the Llama Poo Trials!  Over the coming months I will be trialing Llama Poo – otherwise known as ‘Llama Beans’ – on my allotment and at home in the garden – testing it to see how it compares to other growing mediums, with various fruit, vegetables and herbs and reporting back on it here.

! UPDATE !  September 2014: It’s been a while since I wrote here.  Nearly twelve months in fact.  Sadly the Llama Poo trials have not gone to plan, due to an injury to my hand leaving me no choice but to reduce my physical activity.   Thus my allotment and garden adventures have been a little curtailed, meaning no more llama walking (and so no more llama poo) and very little allotment action.   Yes, the llama poo that i’d already collected has been put to good use – dug in to plantings of potatoes and pumpkins, and added to the watering can to create a nutrient-rich liquid feed that I have used quite regularly (and with good results) on my greenhouse tomatoes and in the garden at home.  But the Llama Poo Trials as I envisaged them taking shape have simply not come to fruition, and  here I now am, nearly twelve months on, shaping up for new beginnings; leaving the privately-rented allotment that I have worked for the past five years to make a fresh start on my long-awaited council embark on a new one.